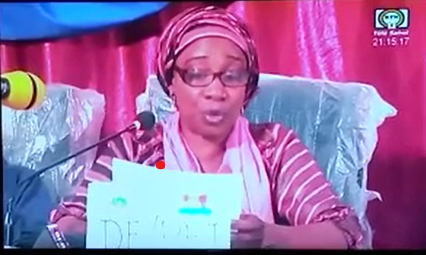 The Youth Entrepreneurship and Work in Niger (JEEN) project is nearly completed. At the launching ceremony of a 10-day agricultural fair in the Zinder region, Rakiatou Gazibo, project partner and director of Partners for Innovation Niger, was one of the speakers. She and the governor stressed the importance to create jobs for young people in this region.

Her speech was broadcasted by the national television channel Tele Sahel. You can listen to the contribution of Rakia Gazibo and the reaction of the governor in French. Below you will find the English translation.

Rakiatou Gazibo says: “The JEEN Project, as defined today, was conceived and implemented to respond to the concerns of the youth in the Zinder region and to empower the Nigerien youth. So this youth could be autonomous, responsible, committed, and can live on their stable and constant income in the field of agriculture, which is the primary economic sector of the region of Zinder but also of Niger.

For 10 days, the agri-sylvo-pastoral and handicraft products of Zinder will be on the showcase of this fair that will highlight the know-how of young people in the region of Zinder. That is why, in his introduction, the second vice-president of the Zinder region welcomed this initiative which constitutes a real framework for exchanges and opportunities. The JEEN project intervenes in 24 communes of Niger in the region of Zinder, opportunity for the governor of the region to thank on behalf of the beneficiaries this dynamic project.

Governor Laouali Amadou Madougou: “The central theme of this fair is ”Youth entrepreneurship, a factor of empowerment and socio-economic stability in Niger” The choice of such a theme is not fortuitous since it fits perfectly with one of the objectives of the program of ‘current renaissance’ of the president of the republic who makes the creation of jobs and economic and social stability of young people a priority of his policy. “

After the launching ceremony, authorities and organizers visited the exhibition booths of the participants, Youth Entrepreneurship and Employment in Niger, a project that aims to create innovative jobs for 2,491 youth.

Youth Entrepreneurship and Work in Niger (JEEN) project This project aims to improve the situation of young people in Niger by strengthening their technical and management capacities through the implementation of a strategy to strengthen their basic, technical and entrepreneurial skills. Funded by the European Commission and the Netherlands Government, the four-year project is implemented in the regions of Tahoua and Zinder from December 2018 to December 2022.

Listen to the presentation.

Partners for Innovation was one of the partners of this SNV project. Look here for more information or contact Rakiatou Gazibo.